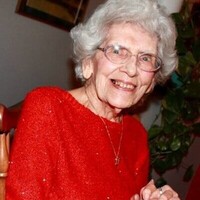 Yvonne Louise Brown (Young), passed away peacefully on Dec 21,2020 from natural causes while at her residence in St. Albans, VT. She was 101 years old. She was predeceased by her husband George Edward Brown Jr. (died in 1992) and her daughter Marie-Louise Brown (died in 2007).

She was described as someone full of life, eccentric, fashionable and a "one of a kind" mother. She was an amazing woman with a big, beautiful smile and she always had a presence in whatever room she was in.

Yvonne lived a very long and happy life. She was born July 3,1919 in Richford, Vermont to parents Ulric and Eva Casavant Young. She was the third child born to a family of six who lived in Richford. She graduated from Richford H.S. in 1937. At the age of eighteen she was invited to move to Brooklyn N.Y. to live with her aunt. It was there, in 1941 while working in NYC, she was introduced to her future husband. They married in 1943 and spent the next 40 years on Staten Island, N.Y. while raising their four children.

In 1947 with help from her mom, dad, brothers, sisters and In-laws (as they all still lived in Richford) they built a family camp on Lake Carmi, in Franklin Vermont. For 70 years during the summers, leaving the grips of the city heat, they vacationed at their camp on Lake Carmi. During those summers their four children flourished, relishing the beauty of the summer in Vermont. Enjoying water sports, learning about nature, farming and developing relationships with their cousins and Vermont friends. During this time a constant flow of grandparents, aunts and uncles, nieces, nephews and friends galore would parade through the rustic gate and trek up the dirt path, entering the camp upon the waters of Lake Carmi. Screams of delight would announce their arrival. Aunt Yvonne and Uncle George welcomed them with bear hugs and sweet kisses. The elders enjoyed their time also as the flag was raised, every day, at 4 o'clock, marking "Happy Hour" had arrived!

Yvonne had in her possession, up until this day, a yellow bed sheet that consisted of handwritten signatures of names of all of her friends, young and old who had come to visit her and her husband while vacationing summers at the camp at Lake Carmi. She would embroider over the names and every stitch she made was a stitch sewn into her heart. She would proudly display that sheet no matter where she lived, as she so loved everyone. How could we not, her children, know how fortunate we were to have her as a Mom.

Yvonne had demonstrated great fortitude as she had to endure her oldest son being sent to war in Vietnam to defend his country. Yes, other mothers had to deal with this as well, but she already knew that kind of pain as she had lost her youngest brother, at the tender age of 19, during WWII. As the rest of the siblings stood behind our mother and father awaiting the arrival of their eldest son's return from war, while at the airport, words were spoken to us indicating the importance of our brothers arrival but we were not to feel any less loved. Our brother wasn't the only hero that day as mom was glorious in that light and that light shown throughout her life.

After George’s retirement in 1977 they moved to Florida, built a new home and spent 30 wonderful years in the sunshine state. Together they enjoyed traveling the world, but spending time with loving family and friends was always her priority. Even after her husband's death in 1992, Yvonne claimed her independence proudly by remaining in Florida while her family resided in the Northeast.

At the age of 90 she moved to Connecticut to be with her daughter Marie Louise. Once again she displayed her fortitude as how difficult it was to lose a child and yet she endured and had the courage to be at her daughter's side as she fought cancer. Those last few years together were so special to them both, but her greatest sorrow was this loss of her daughter in 2007.

Through all the different places she called home she would say her greatest pastime was playing bridge calling herself "an avid bridge player.”  She participated in bridge tournaments at the Airforce base in Satellite Beach, Florida and many other duplicate marathon bridge tournaments. She would make many, many lasting friends along the way wherever she played. Even at 89 years of age Yvonne played three times a week and at the age of 95 she was still playing honeymoon bridge.

Her playing style was said to be aggressive while winning was contingent upon the number of tricks you win, it was told whatever she bid, she would win. Yvonne played her last trick and won again as she went around full circle only to pass away in her beloved home in Vermont.

Her Life Celebration and Funeral Services will be held at All Saints Catholic Church and Cemetery in the Spring.

To order memorial trees or send flowers to the family in memory of Yvonne L. Brown, please visit our flower store.